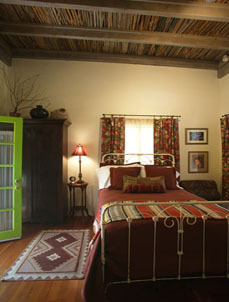 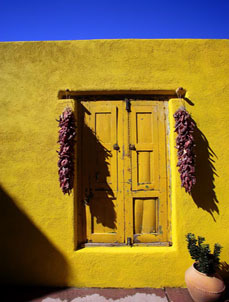 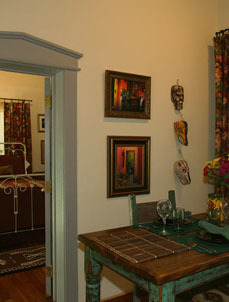 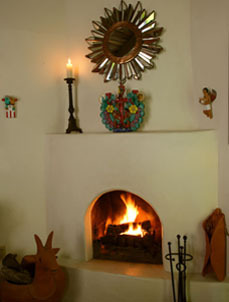 The El Presidio Historic Neighborhood is the oldest neighborhood in Tucson, having developed as Spanish settlers made their simple adobe homes just outside the fort (presidio) that protected the mission and convent established by the Spanish conquistadores and missionaries in 1776. A vestige of the Camino Real, the royal highway that connected Mexico City with San Francisco in California, remains as Main Avenue in the El Presidio neighborhood.

The eventual arrival of westbound settlers from the East Coast of the United States and European immigrants expanded the original Spanish, Mexican, and Native American population, and the arrival of the railroad in 1880 brought new cultures, languages, art, and architecture to Tucson. The movers and shakers of Tucson's nineteenth-century political and social life built grand homes and mansions on Main Avenue, and the area was soon popularly called "Snob Hollow."

In contrast, Meyer Avenue (where La Casita is located) and Court Street were the streets where the middle and lower class folks lived and formed the backbone for the development of Tucson, the Arizona Territory and eventually--on Valentine's Day in 1906--the State of Arizona.

Although many of the grand structures on Main and Granada Avenues were razed during the 1960's preoccupation with "urban development," many fine residences remain, some of which are still occupied by the families who first built and lived in those homes at the turn of the twentieth century.

Court Street and Meyer Avenue provide a streetscape of historic adobe row houses, brick railroad homes, and historically-respectful infill homes that give hint to the color, flavor, and vibrancy of original Tucson.

At approximately 500 square feet, the structure, which connects to three infill townhomes, consists of two rooms and bath. The rowhouse reflects the simple lifestyle of many of the blue collar workers and laborers who have lived in the residence-clerks, blacksmiths, bartenders, tradesmen, and others.

Photographs in the Casita illustrate the condition of the rowhouse before its full restoration in 1985 and the neighborhood's efforts to develop an infill project that protected and enhanced the historic rowhouse.

La Casita retains its original simplicity and charm while providing the guest with a combination of beautiful, comfortable aesthetics and the modern amenities and resources that today's traveler expects.

Guests at La Casita have quick and easy access to the unique culture, scenery, history, colors, and flavors of Tucson and nearby attractions. All of the sites below are either within walking or cycling distance of La Casita, or are within brief (less than one hour) driving distances.

If your interests are primarily of the indoor variety, there are many restaurants in the area with a wide range of menus and prices. Shopping opportunities include the familiar department and specialty stores as well as regional and ethnic arts and crafts. The Tucson Art Museum, the Museum of Contemporary Art, the University of Arizona's Museum of Art, Tucson Children's Museum and galleries galore offer hours of visual delight. Old Town Artisans, a small cooperative of fine artists and craftspeople in a historic residence, is a short two-block walk from La Casita. Small, intimate theaters and spacious symphony halls provide venues for touring Broadway shows, symphonies, and operas. Performances of the Tucson Symphony Orchestra, Tucson Philharmonic, and the Arizona Opera Company, Arizona Ballet, and Arizona Chamber Music Society offer both favorites and the never-heard-before in chmaber music, alternative theater and other on-stage events, to satisfy the most critical audience. Several casinos operated by the Yaqui and Tohono O'odham tribes invite those for whom games of chance and first-class entertainment are irresistible.

If your interests are more focused on the great outdoors, Tucson is a hub of activity for world-class golf, hiking, rock climbing, and bicycling, all of which are also within brief driving times from La Casita. The Catalina, Rincon, Tucson, Tortolita, and Santa Rita mountain ranges surround the city, offering the outdoors enthusiast hiking, bicycling, and mountain biking in an exciting range of elevations, climes, and wildlife habitats. The Mt. Lemmon Recreational and Ski area, with elevations of up to 9000 feet, is accessible for hiking, biking, horseback riding, skiing, snowshoeing, picnicking, fishing, and other outdoor sports opportunities just 30 miles and 45 minutes away from La Casita. The Saguaro East and Saguaro West National Parks provide the novice and experienced hiker, cyclist, and horseback rider with a choice of terrains and vistas. Nearby Pena Blanca Lake and Patagonia Lake offer fishing, hiking, and canoeing, and with a little more driving, the larger lakes entice with opportunities for speedboating, waterskiing, fishing, and swimming.

In addition to all of the cultural, historical, and educational experiences available at the University of Arizona, area sites of interest include the Tohono O'odham and Yaqui reservations, the historic San Xavier del Bac Mission and church (known affectionately as the White Dove of the Desert), the Sonora Desert Museum, the Pima Air Museum, the Biosphere, Colossal Cave Mountain Park, Flandrau Planetarium and Kitt Peak Observatory, and the Old Tucson Move Studio and Theme Park.

Historic Bisbee, Tombstone, and deserted ghost towns are an easy day trip. The artists' community of Tubac, and the restored mission and grounds at Tumacacori, provide fun and interesting stops along the way to Nogales, Arizona, and Nogales, Sonora, Mexico, for a day tirp of shopping and restaurant-hopping

When you check in we'll greet you with a Welcome basket of fresh local Mexican pastries and fresh fruit, bottled water and fresh-squeezed orange juice, as well as a starting supply of regular/decaffeinated coffees and teas. We'll also start your stay with Aveda hair and body products.You'll have your own reserved parking space in the adjoining private parking lot and you can sit outside and enjoy breakfast or evening cocktails in your large, colorfully-walled private patio, complete with antique Mexican doors, container plants and window-shutters. Or, enjoy the birds and plants on the intimate, open flagstoned terrace just across the driveway. We also provide an ample library of maps, travel brochures and booklets describing area attractions for sightseeing, hiking, bicycling, shopping, eating out, et cetera., so you won't need to wonder what to do while you're here.