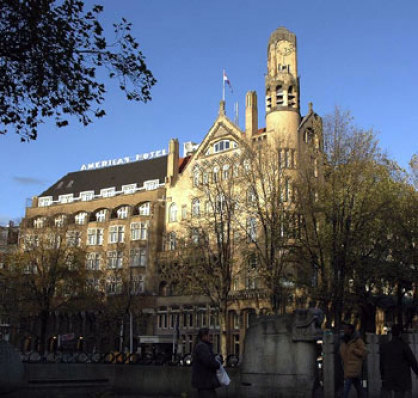 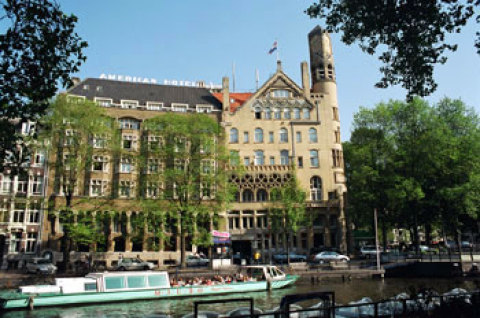 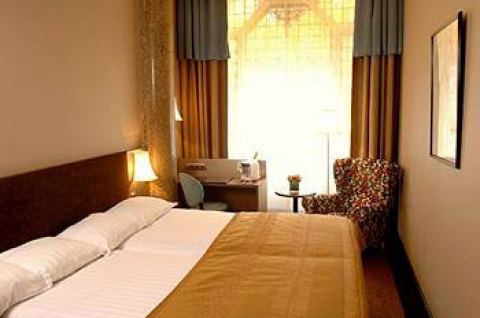 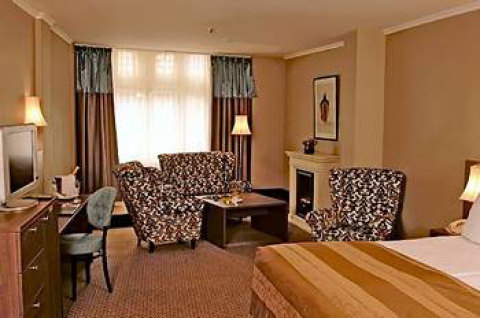 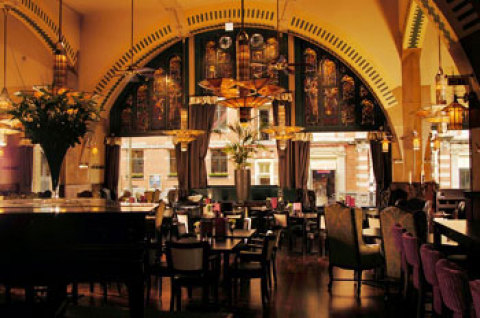 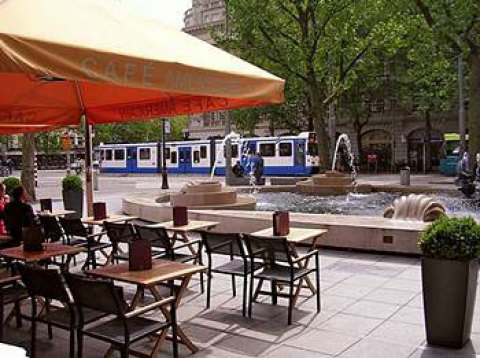 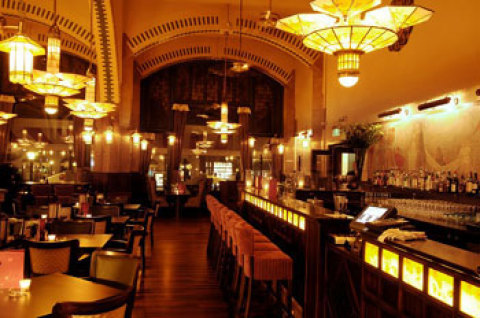 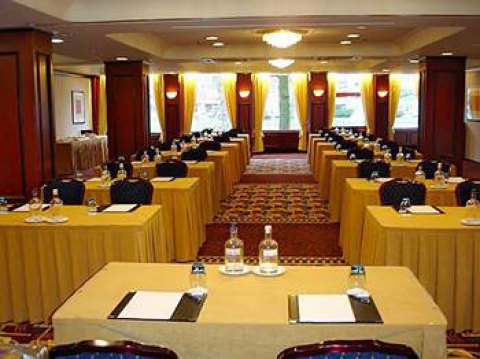 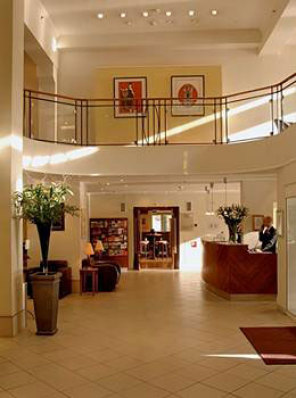 Location. The Amsterdam American Hotel in Amsterdam, The Netherlands, is a listed Art Nouveau building on central Leidseplein square, site of some of the busiest nightlife in Amsterdam. The hotel is 350 metres from the Rijksmuseum and 450 metres from the Van Gogh Museum. Anne Frank's House, the Amsterdam History Museum and the Heineken Brewery are within two kilometres. The hotel is three kilometres from Amsterdam Central Station and 14 kilometres from Amsterdam Schiphol Airport (AMS).
Hotel Features. Built in 1902, the Art Nouveau Amsterdam American Hotel is an attraction in itself, featuring a bell tower and five pairs of statues representing the world's continents.

The hotel's Café Americain has Tiffany lamps and stained- glass windows, which recreate the decadence of the 1920s. Guests can enjoy international dishes as they look out over the Leidseplein Square. The restaurant has a Sunday jazz brunch and dinner, live piano music and a terrace. Bar Americain serves cocktails on the summer terrace set on the square.

The Amsterdam American Hotel has three meeting rooms for up to 225 people, all with wireless Internet access.

The hotel has an onsite fitness suite with exercise equipment and a sauna.

Expert Tip. Guests can take a canal boat tour from the hotel's own landing stage on the Leidsecanal, part of Amsterdam's central canal system.

Getting there. A railway station is located under Schiphol Plaza, in the central hall of the terminal. Every 15 minutes a direct train runs to Amsterdam Central Station. Shared Schiphol Travel taxis can be found outside the arrivals hall. The cars can seat up to eight people and cost around 19 EUR per person. Private taxis into Amsterdam city centre cost approximately 40 EUR. Public buses frequently run to Amsterdam and other destinations. Buses 197 and 370 go to central Amsterdam and Amsterdam Zuid. Prices are all subject to change.

Getting around. Amsterdam American Hotel is on Leidseplein square in central Amsterdam. Amsterdam can easily be explored on foot. However, there are convenient bus, tram and metro services running through the city and outside areas. Cycling is also a popular way to see Amsterdam. There are taxi ranks at the central station. Driving within the canal ring is discouraged.

Driving directions. From Amsterdam Schiphol Airport:
Take the A4 and exit at junction 1 towards Sloten/Schinkel.
Take the S107 and turn right onto the S106.
After two kilometres, turn left onto Nassaukade and then right onto Niewe Passeerdersstraat.
Turn right onto Marnixstraat and right again onto Leidsekade.