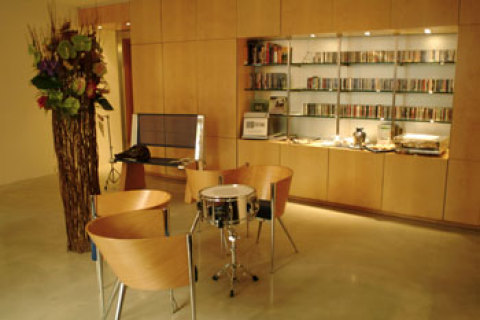 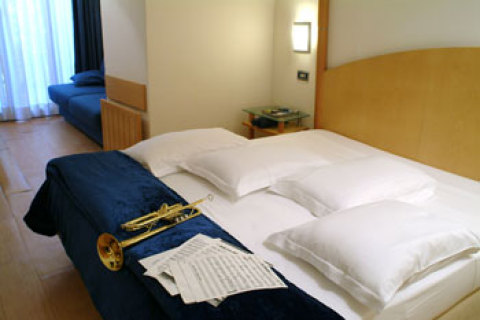 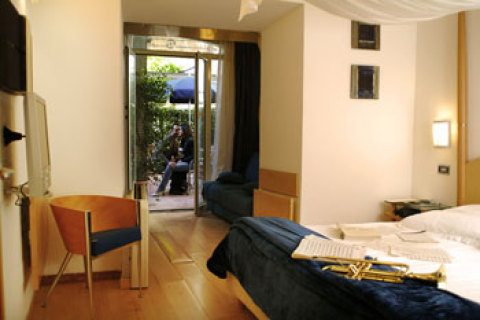 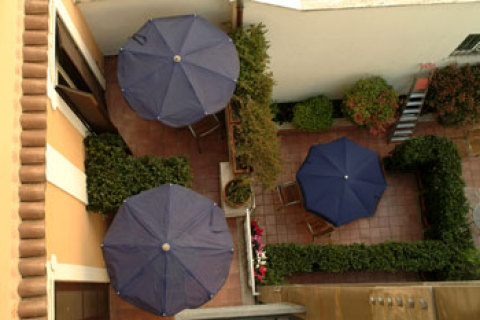 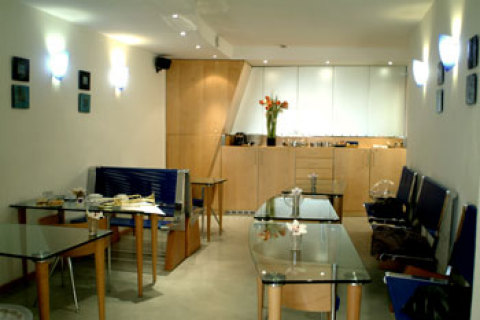 Franklin Feel the Sound
Previous Next

Location. The boutique Franklin Feel the Sound hotel in Rome, Italy, is located one kilometre from the Vatican City and St Peter's Cathedral, about 15 minutes on foot. The Spanish Steps, Pantheon, Trevi Fountain and Via Condotti's shops are within three kilometres. The hotel's closest metro stop is Ottaviano.
Hotel Features. Franklin Feel the Sound opened in 2001 and is owned by a musician. The reception houses a working 1970s metallic gramophone and a CD library for guest use (surcharge/deposit). Bicycle hire can be arranged by staff at the 24-hour front desk and complimentary newspapers are available. The hotel is smoke-free.

Blue chairs and modern glass tables decorated with models of musical instruments furnish the hotel bar, which doubles up as the breakfast room. The garden terrace is open in the summer for breakfast, drinks and snacks. The hotel serves complimentary buffet breakfast and offers 24-hour room service.

Expert Tip. Rome's famous Sistine Chapel is one kilometre away in the Vatican City museum. Built between 1475 and 1480, it takes its name from Pope Sixtus IV Della Rovere.

Getting there. The Leonardo Express runs between the airport and the Termini train station in the city centre every 30 minutes. The journey time is about 35 minutes and single tickets cost 9.50 EUR. Termini station also connects with Rome's metro stations. The Terravision shuttle bus runs between the airport and Termini station. Taxis to the city centre cost about 60 EUR, and taking a metered licensed taxi is advised. Prices are all subject to change.

Getting around. The hotel is on Via Rodi. Rome's historic city centre is easy to explore on foot, as many attractions are located close together. The city has an efficient public transport system, including trams, buses, suburban trains, and metro (underground). The hotel's nearest metro stop is Ottaviano. Tickets can be purchased from tobacconists and ATAC ticket machines, and should be bought prior to boarding. Single tickets cost 1 EUR, and are valid for 75 minutes, covering one metro trip and unlimited bus travel. Driving in the city centre is not advised for visitors. The hotel offers garage parking nearby.

Driving directions.From Rome Fiumicino Airport (FCO):
Join the G.R.A (Grande Raccordo Anulare)
Take the exit marked Aurelia.
Carry along onto Via Ubaldi and Via Emo.
Continue onto Via Candia which leads to Via della Giuliana.
Via Rodi is on the right, where the hotel is located.

Map of Franklin Feel the Sound

Photos of Franklin Feel the Sound

Book on Line for Franklin Feel the Sound